You join us in the historic market town of Newtown set in on a sibilant sweep of the River Severn, known to the Romans as the Sabrina, and the Welsh as the Hafren. The town also nestles between the walls of its valley. Once known as the Leeds of Wales for its weaving it's better known now for its ducking and diving. Once the birthplace of the great social reformer Robert Owen and a hotbed of radical chartists, now it's the stomping ground of the grandiloquent self-seeker.

Join us in partnership in this town defined by flannel. Come and see the remaining mills now just a well-rounded-relic. Get to know the solid burghers that make up the largely co-opted representatives. Get to know the central spaces of green that bring a variety of wild life to the streets, especially on weekends and Bank Holidays. 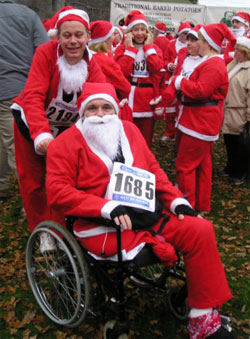 PC G Sleighmaker has yet to deny this website's claims that his force used CS gas on rioting Santas in Severn Street over a dispute in the supply of suitable Christmas Eve vehicles from his long-standing family business. With over 4000 Santas now officially registered in Newtown we understand that his business is struggling to meet the demand.

Mrs Trellis of Llandinam has voiced many local people's concerns that the use of the national papers by Newtown police to further their action against heavy-drinkers will encourage hardened bands of Santas such as the Millwall Clauses to register for next year's event to show Newtown how to run a proper riot. 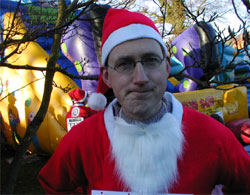 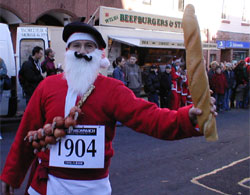 M. B. Trellis from Montauban, France a second cousin, thrice-removed on Mrs Trellis's gallic side waves his stick at our intrepid photographer

The world famous Newtown Santa Run is held on the first Sunday of each December and is the best excuse in the world for wearing a red dress and a false beard without fear of immediate arrest. Practiced competitors have been known to come in in a little under 3 hours, visiting each of the seven pubs en route. However, claims that a member of the local Athletic Team completed this feat in a little under 10 minutes are now widely put down to mass hysteria.

Last year's event was the biggest in the world and ended with the world's biggest pub brawl involving men dressed in funny red costumes and fake beards. A daring bank raid against BatWest on the same day has presented the Newtown police force with the most difficult CC-TV analysis in UK history after the unknown gang members blended in dressed as Clauses.

Mrs Trellis was yesterday recovering in the bar nearest the start in pre-race training for the next event. She has said that after a few G&T's she will be up for it very soon. 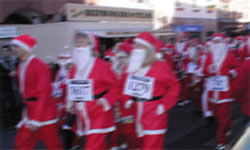 New Amusements for the Citizens of Newtown on Hold

The proposed new amusement arcade for Newtown has been rejected by the Planning Department after concerns that it will be impossible to stop Mrs Ivy Trellis of Llandinam cleaning the town out of ha'pennies.

Her prowess on the machines is unmatched and she has been banned from gambling centres in most of the UN-recognised territories of the world. On a recent tour of the town to case the proposed new arcade, Mrs Trellis said: 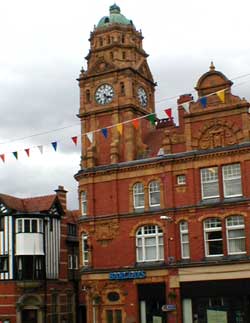